Every year the British School at Athens offers an intensive 3 week summer course for undergraduate students interested in Ancient Greek history. On this course, students are taught by 3 specialists in Greek Ancient history – one of them being Dr. Chryssanthi Papadopoulou, the Assistant Director of the British School at Athens. Approximately 10 days are spent in Athens looking at various archaeological sites and museums (among these the Acropolis, the Parthenon Museum, the Kerameikos, and the National Archaeological Museum), and 11 days in the Peloponnese visiting Mycenae and Tiryns, and Corinth, to name a few. In 2016 I successfully applied for a place on this course.

Arriving in Greece and finding your way to the British School having never been to Greece, let alone not knowing a word of the language or anyone else on the course, was a little intimidating to say the least. However, settling in was a quick process, and I met most people on the course soon after arriving. In the evening a group dinner of pizza on the veranda and a healthy ravaging from the local mosquito population helped speed the process of getting to know those I had not yet met.

On our first day in Athens, we were thrown in the deep end with an 8-hour day on the Acropolis. This was a bit of a shocker, as anyone who’s been there will know, as there isn’t any shade up there, and in 40°C it was at times hard work (even the local Greeks were struggling in the temperature!). Nonetheless, it was a rewarding day as we were given special permission to go into the Parthenon, which was an amazing privilege (you could really see some of the architectural illusions), and we were given a guest talk by an expert on the Propylaea. This was incredible as some of the information that we were told about the Propylaea was unpublished research.

The Athenian Acropolis wasn’t the only site where we had a lecture from a site expert. At Bassae (a temple on a mountain in the Peloponnese), we had one with Konstantinos Papadopoulos, and as with the Parthenon, we were allowed inside the temple, which is usually prohibited to the general public. Here we learnt about all sorts of techniques in building conservation, and the restoration process of the temple.

Learning about the latest views on Greek history was one of the main aspects of the course. Whilst this was hugely exciting, we were also told about some of the most current archaeological debates. For example, during American excavations at Mycenae, they found a bit of stone that they believed was part of the throne (found on the east side of the throne room, suggesting that the throne may have originally sat on that side, rather than in the middle as previously believed). The Greek archaeologists apparently refuted this and declared it part of a toilet! I believe the Greek archaeologists have now conceded that it may be part of the throne. Similarly at Sounion, where the famous temple of Poseidon is, underwater archaeologists have uncovered what they believe is a boat house, although some dispute this saying that it is more likely to be a slip way. 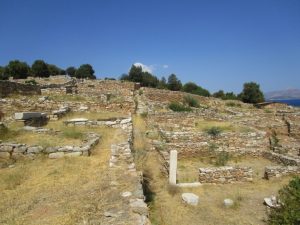 My favourite site on the whole trip though was Rhamnous, a ruined town that had been important in Greek defense during the Peloponnesian War, and had two natural harbours – although they don’t exist as such any more you can still see their outline. After having a lecture on the site, we were left to walk around freely for an hour or so. As the site is off the main tourist trail, you can explore at your leisure without being corralled by employees of the site, who have a tendency to blow their whistle at you it they think you are touching any of the archaeology or taking an unorthodox route. It was a wonderful afternoon, and it felt as though no one had ever really been there as you could see anchors and tiled floors in situ.

This was an amazing experience that has really inspired my interest in Greek history and one that I would whole heartedly recommend to any first or second year undergraduate. Whilst at times it was hard work because of the intensity, heat, and simply sometimes, being in another country, I have made what I hope to be some lasting friendships with like minded people. I will always remember my time here with great fondness.

For those interested in applying for the course there is still time to apply for this year – the closing date is 31st March 2017: