I chose to write about Epicurus because I think he is important. The world we live in has recently become, undeniably, highly politicised. I see the teachings of Epicurus, generally ignored as the basis for a moral code, as a solid foundation for friendly interaction between people. Perhaps if his philosophy was studied more closely, we would be further from the war of attrition between a myriad of inflexible groups, in which we currently find ourselves.

When we, the general public, hear the words ‘ancient philosophy’ our thoughts are generally drawn to Aristotle and Plato, the great beardy philosophers of the Greek Classical Period. Perhaps the more well-read amongst us will think of, gods forbid, the Stoics: Seneca, Epictetus or Marcus Aurelius (whose morose Meditations have plagued the world of Hellenistic Philosophy with dreariness for far too long).

But the Hellenistic world, fortunately, produced far more than just Stoicism; nor were the Stoics the only school of philosophy to influence modern thought. Indeed, one could argue that modern thought has been influenced more by the chief opponents of the Stoics, and the subjects of this piece: the Epicureans.

Born on Samos in 341 BCE, Epicurus founded his philosophical school – the Garden – outside the walls of Athens in 306. There he lived amongst his friends and fellow members of the school (with Epicurus considering the former the more important qualification) and constructed his philosophy, based upon the attainment of pleasure through the removal of both physical and mental pain. He died there in 270, leaving his school and home to his disciples.

Epicureanism thereafter spread rapidly through the classical world, eventually becoming a major philosophy within the Roman Empire. Gaius Cassius Longinus, the tyrannicide, was an Epicurean (though seemingly in breach of the Epicurean principle of not getting involved in politics). The Roman philosopher Lucretius, writing in the 1st Century BCE, penned the definitive distillation of Epicurus’ philosophy in Latin, De Rerum Natura (‘On the Nature of Things’). Both Cicero and Seneca discussed Epicureanism in their works, and the charred papyrus scrolls discovered in the Villa of the Papyri at Herculaneum are a treasure trove of Epicurean works, including the works of Philodemus.

A series of Stoic emperors and the rise of Christianity, coupled with the general reluctance of Epicureans to engage in public life, led to the decline of the philosophy in latter half and aftermath of the Roman Empire, with its only echo to be found in the monastic communities of the Christian monks (environments which, I suspect, were much less joy-oriented). However, the ideas of the Epicureans would be rediscovered in the early Renaissance, and went on to become the cornerstone of modern thought.

Epicurean atomism, the theory that everything in the universe consists of invisible atoms of a fixed shape, size and weight, would be developed by 16th and 17th Century scholars to develop the heliocentric solar system model of Copernicus into something defensible, and by Renaissance alchemists to develop the theories that would eventually become the science of chemistry.

Epicurean philosophies have also informed some of the greatest historical social thinkers: Epicurus’ view that supernatural entities (like gods) are unable to have any direct influence in the natural world informed the metaphysical views of Kant and Hume, Epicurean ideas about natural law and justice informed the social contract theories of Hobbes and Rousseau, and the principle of maximising pleasure and reducing pain was a driving idea for the founders of utilitarianism, Jeremy Bentham and John Stuart Mill. Epicurus’ ideal of living a contented life even informed the walking, talking controversy that was Karl Marx.

The works of Epicurus and his successors have had an immeasurable impact upon the social and scientific thought of the modern world. Their slip back into obscurity, in an age where ever increasing numbers of people report being unhappy or discontent with daily life, cannot be allowed to stand. So, whilst Aristotle and Plato are all well and good, I would argue that we all need to inject a little Epicureanism into the mix. And, yes, I suppose we can study the Stoics too…

A comprehensive collection of works by Epicurean philosophers can be found in The Epicurean Philosophers, edited by John Gaskin and published by Everyman. 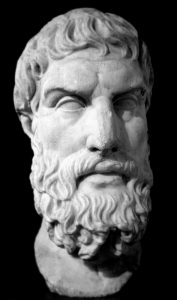