The idea of a ‘Queen of the Underworld’ has always appealed to me, and so I was delighted when I found out that George O’Connor’s graphic novel ‘Hades’ (see http://olympiansrule.com/) centred around just that. O’Connor’s Olympians series was created by drawing on ‘primary documents to reconstruct and retell classic Greek myths’[1], so it is surprising that O’Connor felt the best way to convey the story of Hades, was by telling a coming of age story concerning Hades’ wife, Persephone. The fourth instalment to the series has proved a run-away hit with critics, many making comments such as ‘I loved the twist on this myth of how Persephone became the Queen of the Underworld’.[2]  One of the key things to explore in reading this, is to find out why O’Connor took a character so ostracised in her own mythology, and made her the star.

Persephone is first introduced in the comic as Kore: an awkward and seemingly minor character. O’Connor emphasises this by placing her in a small, side panel, of which Kore only occupies a fraction. She is shown in an awkward position, and due to her innocent reaction to Apollo, her naivety is emphasised. The Homeric hymn to Demeter uses the word ‘playing’ to describe Persephone before her abduction, which Debloois argues shows her to be ‘like a child’ (1997,248).[3] Kore seems to personify women commonly found in classic tradition: as a young woman, she is submissive to those around her. Dowden notes that in myth, ‘women may be maidens, or matrons, but not unmarried women’ (2002, 46),[4] and so it is easy to see that Kore fits straight into the mould of ‘maiden’. It is also notable, that in the Homeric Hymn to Demeter, Persephone and her thoughts occupy very little of the narrative, and is instead filled by Demeter. By showing Kore to be awkward and pushed aside, he is symbolically representing the traditional way which Persephone has been depicted in antiquity, and the model he is going to challenge.

Later in the comic, Kore adopts the name Persephone, officially accepting her role as Queen of the Dead. Gone is the awkward youth, now we see a woman single-handedly occupying a whole page. O’Connor’s choice to have her fill the page shows she is no longer pushed aside, but knows who she is. A smile plays on her lips as she speaks her new name, emphasising her metamorphoses. This page tells the reader two major things: this is a coming of age story, and Persephone is the real protagonist in this graphic novel. The bold colours which O’Connor elects to use shows that this is not the same maiden we were introduced to, picking flowers in a bright field, and thus illustrate her change as a character; she is sure of herself. 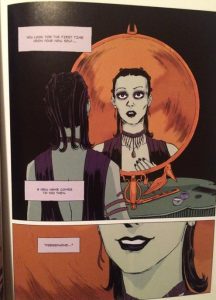 By having her so readily break free of the bonds of her mother, and embracing such a drastically different path, O’Connor is creating a feminist statement. We should not view her as a meek character, but as a strong and powerful woman in charge of her fate. The tradition of Persephone being powerful is even reflected in some ancient Roman sources; Ovid calls Persephone ‘the queen, the most powerful woman in the underworld’ (5.507).[5] Nixon argues that the Homeric Hymn to Demeter is an example of feminism in the ancient world, as it ‘focuses on a harmonious mother-daughter relationship, rather than a violent father-son dyad’ (2002, 92). In this way, O’Connor can be seen to take on the original intent of the Demeter/ Kore relationship, and show it through the lens of modern feminism.
The Happy Couple- Persephone and her sweetheart (200)

O’Connor does not fail to explore the relationship between Hades and Persephone either. As the images below show, there is an accuracy to showing the two gods ruling harmoniously side by side. In fact, a number of ancient sources which deal with Hades and Persephone show them to be equals. Odysseus ensures that he makes offerings to ‘the powerful Hades, and to revered Persephone’ (11.47),[6] while the Iliad names her ‘dread Persephone’ (9.457).[7] There is no doubt that throughout antiquity literary tradition, Persephone was viewed just as formidably as her husband. 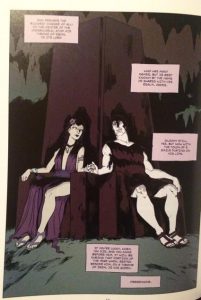 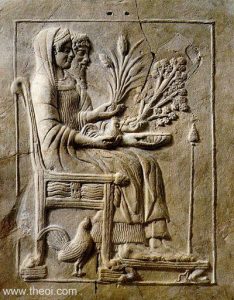 O’Connor discusses this in the epilogue to his graphic novel; he comments ‘maybe Persephone likes being the Queen of the Dead. It would certainly explain why she’s apparently always hanging around the Underworld.’ O’Connor’s exploration of Persephone as a willing and eager Queen of the Dead definitely shows her as a woman in control of her fate. Indeed, it is notable that in the panel shown above, they are shown to mirror one another; they wear the same colours, their body language is exactly the same, and they sit on equal thrones. It seems Persephone is completely comfortable with her position of power.

In ‘Hades: Lord of the Dead’ O’Connor achieves a coming of age story, which details the awkward and forgettable Kore’s transformation into the formidable Persephone. He draws from a number of ancient sources, but ultimately he tells the story through the veneer of feminism. He explores the famously female lead story, and updates it in order for his audience to see a powerful woman in control of her own fate. Persephone is definitely someone his younger audience is portrayed as a role model.