This week’s blog post is another example of student work from the module Beyond Mainland Greece – this time two pieces by our students. Dr Stephen Harrison (module convenor) writes, ‘The Achaemenid kings had lots of inscriptions written on their behalf and only one such document survives from the Seleucid era – the Antiochus Cylinder. This object was produced in the reign of Antiochus I (281-261) and was found in the ruins of the Ezida temple in Borsippa, a city in Babylonia. It describes how Antiochus carried out rebuilding work in the temple and illustrates that he was trying to prove to locals that he could fulfil their expectations of how a king should behave. With this particular artefact, you can see how students responded differently to a piece of evidence.’ 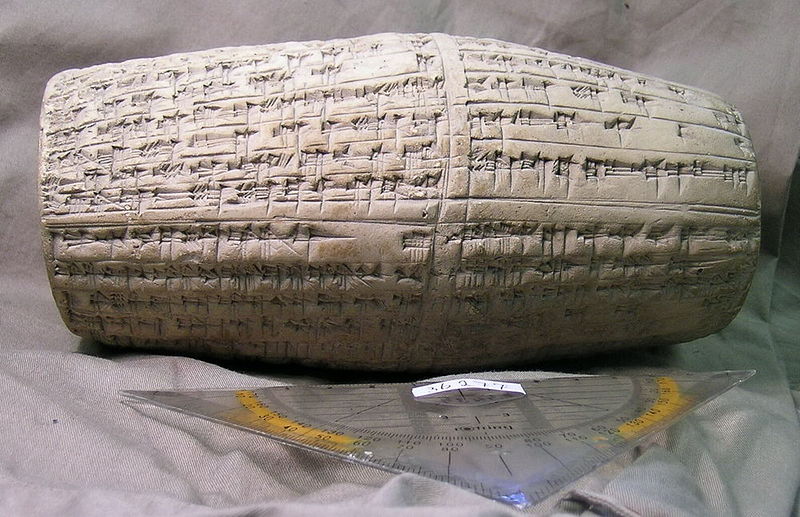 The Antiochus Cylinder, ca. 268 BC. Image sourced from: https://commons.wikimedia.org/wiki/File:Antiochus_Cylinder.jpg

Translations of the text can be found at:

The Antiochus Cylinder by Alfie Oake

The Antiochus Cylinder is a Babylonian text, written in the name of Antiochus I and describes how Antiochus founded a Babylonian temple in 268BC. In order to assess the usefulness of this source, I will solely examine Antiochus’ attempts to endorse himself to the Babylonian priests, through his use of royal titulatures. At the start of the passage we are told that Antiochus is the “great king”.[1] Here, Antiochus is claiming to be just as powerful as all the other rulers of Babylon who adorned themselves with this title, such as the Persian king Darius who describes himself as “the great king” in his inscription at Behistun.[2] Antiochus goes on to describe himself as the “aplu aseredu” or “foremost heir” of Seleucus.[3] One could argue that, here, Antiochus is not just aligning himself to his father and predecessor Seleucus I but also to the great Neo-Babylonian King Nebuchadnezzar II. Due to the fact that this great Babylonian king appears to be the only other ruler of Babylonia to take this title.[4] The title aplu aseredu is often used by Nebuchadnezzar, with the “foremost heir of Naboplassar” appearing regularly in many building inscriptions from his reign.[5] Paul Kosmin argues that this cannot be coincidental and that Antiochus’ included this title in the hope that the Babylonian priests, who would have been copying Nebuchadnezzar’s inscriptions, associated Antiochus with the great Babylonian king.[6] However, the production of this cylinder may limit its value as a historical source. Kathryn Stephens claims that this passage contains many lines identical to other ancient Mesopotamian inscriptions, and therefore a strong chance that some lines may have been copied over from other passages.[7] Which as a consequence limits what we can read into individual word choices.[8] However, I would argue that because “aplu aseredu” is solely found on inscriptions carried out by Nebuchadnezzar II it is far more feasible that Antiochus’ mirroring is deliberate rather than accidental.

Berossus’ Babyloniaka further supports this idea that Antiochus was keen to present himself as a similar ruler to Nebuchadnezzar II. The Babyloniaka was a history of Babylonia and although this work has not survived it is available in fragments. From these fragments it is clear that Nebuchadnezzar II’s reign is portrayed as the paradigm of good Babylonian kingship.[9] Berossus, a Babylonian priest, wrote this book for Antiochus and therefore, it is highly likely that Antiochus would have been aware of how Babylonian priests revered Nebuchadnezzar and so moulded himself to his image. Thus supporting this idea that Antiochus use of royal titles were very deliberate and intended as propaganda. As a result of this cylinder being discovered at the temple of Nabu coupled with the reasons previously mentioned it would appear that this propaganda was mainly intended for the Babylonian priesthood rather than the people of Babylon. However, Antiochus surely hoped that with the religious order on side the people would soon follow. Therefore this text ultimately provides one with a great insight into Seleucid relationship with Babylonia as a whole.

Kuhrt, Amelie, Berossus’ Babyloniaka and Seleucid Rule in Babylonia. In Amelie Kuhrt and Susan Sherwin-White (eds.), Hellenism in the east: the interaction of Greek and non-Greek civilisations from Syria to Central Asia after Alexander. (London: Duckworth), 1987, pp.32-57.

Kosmin, Paul. Seeing Double in Seleucid Babylonia: Rereading the Borsippa Cylinder of Antiochus I. In Alfonso Moreno and Rosalind Thomas (eds.) Patterns of the Past: Epitēdeumata in the Greek Tradition. (Oxford: Oxford University Press), 2014 pp. 174-194.

The Antiochus Cylinder by Isabelle Mansfield

However, is this inscription a one-off representation of Antiochus as sympathetic towards the Babylonians or was this they way he wished to be universally represented? Coins give an idea of how Antiochus presented himself throughout the Seleucid empire, including Babylon. Almost all examples of coins minted under Antiochus incorporate images from Greek mythology and there are none featuring images of Babylonian mythology.[8] As these coins would likely be spread throughout the Seleucid empire, they give an idea of how Antiochus wanted to be viewed more generally. The absence of Babylonian mythology, despite Antiochus’ apparent links to it, may be proof that the Seleucid king was not, in fact, as closely linked with Babylonia as he wanted the Babylonians believed. Antiochus’ presentation of himself elsewhere in the empire makes the Antiochus Cylinder appear to be propaganda tailored to Babylonians in an attempt to pacify them and ensure loyalty. This interpretation of the Cylinder as propaganda is strengthened by the fact that it is written in Akkadian, not Babylonian which automatically alienates the Babylonians from their apparently sympathetic ruler. By writing in Akkadian, Antiochus demonstrates his dominance over his Babylonian subjects.