Swansea University hosted over 100 delegates 21-24 March 2016 for our international conference on Demon Things: Manifestations of Ancient Egyptian Liminal Entities. The event was organized by the Egypt Centre and Egyptologists in the College of Arts and Humanities, and took part in the Taliesin Theatre. Delegates and speakers came from around the world (including Australia, Russia, Egypt, USA) to take part. The conference was kicked off with an introduction by Pro Vice-Chancellor Professor Martin Stringer followed by the launch of the Leverhulme Trust funded “DemonBase”, a database of imaginal beings accessible for researchers (an online catalogue for the public will launch during the British Science Festival). Along with 22 academic presentations, the event included a feast at Sketty Hall, a Night at the Museum at the Egypt Centre, ritual imbibing at the Pub on the Pond,  and a tour through the magical Gower—including a visit to Arthur’s Stone and the Gower Inn). People unable to attend followed the event on Twitter (@DemonThings), Facebook (The Ancient Egyptian Demonology Project), and postings that begin at http://www.demonthings.com/conference22march/

One of the conference speakers, Wael Sherbiny, talked about his discovery of the oldest depictions of ancient Egyptian demons, which features in this newspaper article: http://www.livescience.com/54482-oldest-depiction-of-ancient-egyptian-demons-found.html.

The event was even featured in newspapers as far away as China! http://www.newsghana.com.gh/british-experts-say-curse-of-the-mummy-movie-was-just-a-hollywood-twist/ 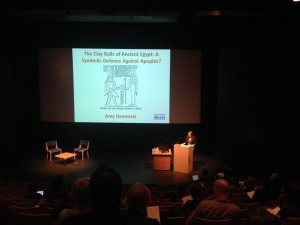