The Technologies of Daily Life event (TODL for short), hosted by our Department in collaboration with the Society for the Promotion of Hellenic Studies and the South West Wales Classical Association, took place on 2nd and 3rd July and combined an academic conference with a schools’ day, to demonstrate the use of the ancient technologies to our modern world.

The TODL event began with the schools’ day in which pupils experienced aspects of the ancient world they may not otherwise encounter. This involved running a range of talks and workshops across the day with a number of workshops which were attended by a number of schools. These were led by lecturers and assistants from Swansea University, Cardiff University, and the British Society for the History of Science (BSHS). In the morning, we welcomed 90 pupils from four primary schools from the Afan Valley; in the afternoon, we worked with 50 comprehensive school pupils from two secondaries in South Wales. 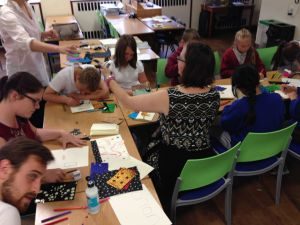 Astronomy workshop with Dr Melanie Keene
In the first room there were workshops on astronomy and rope making. The astronomy talk explained how the ancients named constellations and their significance. Once the pupils discussed the theory, they were free to design, create and decoration their own constellations. In the same room was also a workshop on rope making, which was led by Lois Robinson, who just finished her undergraduate degree at Swansea University. Her workshop explained how the ancients would make rope, and so the pupils themselves followed the instructions, which involved stripping the nettles and tying them into a strong rope. Alex Ferron, one of the helpers, had a little fun making his own nettle jewellery. Henry and Molly, two other helpers, had great success making a rather long rope between them. 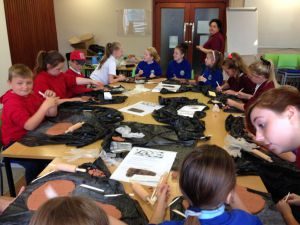 Curse tablets – workshop with Dr Evelien Bracke, Callum Carroll and Leigh Herring
In the next room there were workshops on magic and cosmetics. Magic proved to be on the more popular workshops which was led by Dr Evelien Bracke (Swansea University). The use of votive offerings and curse tablets was discussed, and then the pupils had a chance to create and inscribe their own votive and curse tablets made from clay.  Also in this room was a workshop on ancient cosmetics and medical recipes led by Dr Laurence Totelin from Cardiff University. Many pupils got to grips with using a pestle and mortar for the first time to create their own cosmetics. 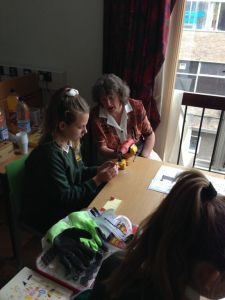 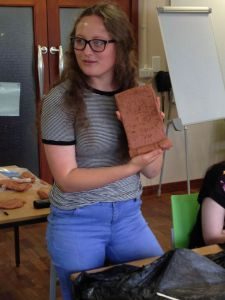 Comprehensive school pupil discussing her curse tablet
In the final room, a further two workshops were being run. Dr Tracey Rihll (Swansea University) ran a workshop on ancient drills and gem stones. Students were able to experience how ancient drill’s worked by using similar tools and attempting to drill through a log. Tracey also did gem making: students could engrave a gem as they wished and they used it to make a seal on the clay provided another very popular workshop. Also in this room were three curators from Caerleon, dressed in a similar fashion to the ancients, demonstrating ancient forms of cooking. Their workshop involved examining modern ingredient and comparing them to their ancient counterparts. The pupils could then assist in making bread using all the ancient tools. Many students enjoyed this workshop despite ended up covered in flour. 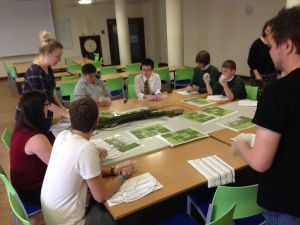 Making rope with Lois Robinson
The feedback we got from the pupils clearly demonstrates that they had a fabulous time and learned something new:
‘I enjoyed and learned a lot about the Greeks and ancient world. I’d definitely come again.’
‘It was the best!’
‘Staff were really friendly and helpful.’
‘This has given me better understanding and respect for ancient Greek stuff.’
‘I have learned a lot from today.’
The teachers also told us the pupils and they left inspired and ready to learn more about the Greeks. 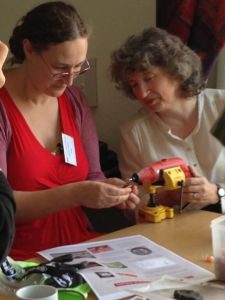 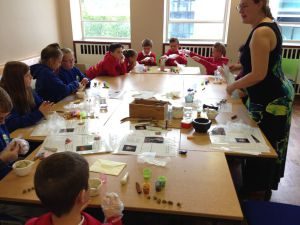 Dr Laurence Totelin leading a workshop on ancient medicine
The conference…
After the school day, Denis Morin arrived early to set up for his demonstration. His demonstration took place later at night where he made authentic bronze arrow heads from scratch. He used similar tools to the ancients which would require heating the bronze up to 1000o. A time lapse of the attempt to make arrow heads is available on the Twitter page, @TODLSwansea. Denis also gave a talk on metallurgy the next day. Before this demonstration began however, a fascinating talk by Serafina Cumo on the Foundry cup took place. 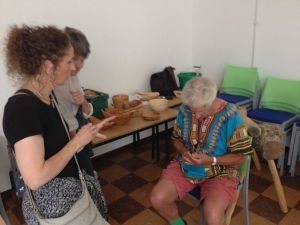 The second day had just as many demonstrations alongside the academic conference. At the conference there was a wide range of topics regarding aspects of ancient technologies. The conference involved topics such as how to detect pigments on statues and artefacts with a specialist camera, a talk from Giovanni Verri. Laurence Totelin returned for a second day to discuss the medicinal use of wool. Victoria Keitel, a PhD student from Reading University gave a talk on her research regarding the standardisation of Skyphoi. Adam Hart Davies gave a very hands-on talk regarding ancient wood work by explaining the similarity of ancient tools to tools we use today. Adam Hart Davies then took to making an ancient spoon and bowl from plain logs of wood as his talk progressed. 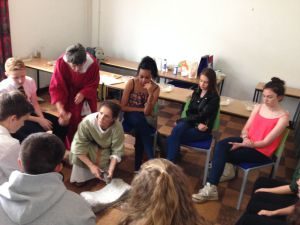 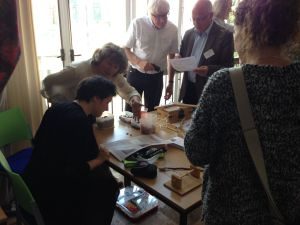 There were a number of other talks as well but between talks there were plenty of demonstrations to be seen. Giovanni Verri provided a demonstration of the process where he identified the pigment Egyptian Blue in artefacts alongside Alan Hart Davies who showed off even more wood working skills. Other workshops included a third year student, Leigh Herring, operating a loom and a 3D printed pulley slowly pulling up 15kg of weight up several flights of stairs. 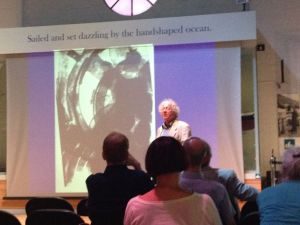 The end of the two days of ancient technologies was rounded off with a trip to the National Waterfront Museum. This included a wine reception for all those who helped and spoke at both the TODL and British Society for the History of Science conference (which was taking place at the same time). The evening concluded with a fantastic talk from Mike Edmunds on the Antikythera mechanism and brought the very busy two days to a close. From pupils to speakers, the two day programme was enjoyable to all who came to experience technologies of daily life in ancient Greece.

For a Storify narrative of the event, see http://sfy.co/s0gAA.